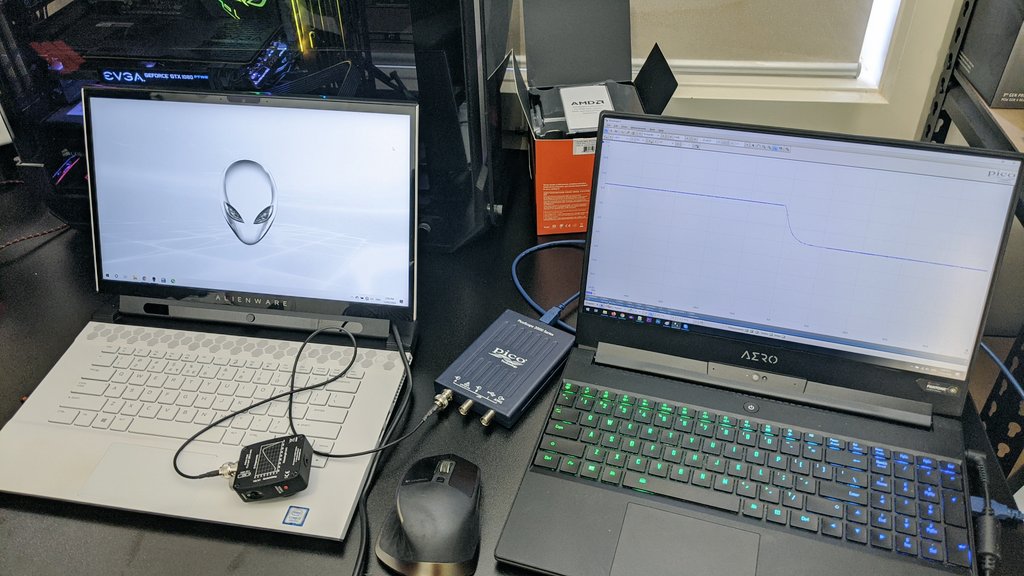 I’ve added laptop screen response time testing to my laptop reviews, this post will help you understand what the values I am reporting mean.

First off huge shout out to Tim from Hardware Unboxed, and this guide from TFT Central. Without information from these sources, I would not be able to add response time testing to my laptop reviews.

I measure the center of the panel using the DET100A2 photodetector from Thorlabs with an Oscilloscope (PICOSCOPE 2204A) attached to a separate laptop. I am measuring 10% to 90% which is standard.

Laptop panels are tested while plugged into wall power with the screen set to the highest available refresh rate.

Screens are left on for at least 30 minutes to fully warm up prior to testing.

Here’s the table I will be using to show response time:

It’s labelled 0-255 on the top and bottom, these are colour values. 0 is black, 255 is white, and in between are shades of grey. Response time will vary between the transition of the colours, so to gain an accurate picture it’s important to test multiple transitions between different colours.

The numbers within the table are millisecond values and represent rise and fall times.

The green-yellow colours on the table above correspond to the following scale:

Once we have all this data, we can use it to work out the average grey-to-grey (G2G) response time:

Here’s what each of these values means:

That’s it, this particular screen was from the Alienware m15 R2, so I would say it has an average response time of approximately 6.7ms, however other values are available too depending on how you want to slice and dice the data.

I will post all my response time tests on this page.