Intel announced their new 10th generation H series processors for laptops on April 2nd 2020. Here’s why they probably won’t offer much of a performance improvement over the previous 9th generation.

Intel have been using 14nm for laptop processors since Skylake was introduced with the 6th generation in 2015. There have of course been improvements since this, however the most noteworthy performance jump was with 8th gen with the i7-8750H.

This is simply because of the jump up from 4 to 6 cores. If you’re a user who runs applications that benefit from multiple cores, this was a nice upgrade. If you’re just playing games though, the difference is minor in most titles.

The bump to single core clock speed is only useful if a single core is active, which on a modern machine isn’t all that often, granted it depends on the workload. The all core turbo boost speed was only 100MHz higher with 9th gen, however in most cases this would make no difference. The 33% cache increase was probably the most important change here.

Few laptops that I’ve tested can actually sustain a 4GHz all core turbo boost speed under a CPU load. This is even more difficult if the discrete graphics is in use, many laptops will lower the CPU power limit during such a combined workload to avoid getting too hot.

If the power limits are lowered, or there are otherwise thermal limitations, hitting the slightly higher all core turbo speed probably isn’t going to happen in a sustained workload. It may be beneficial for shorter burst style workloads, which for many users may actually be the majority of the work.

For consistent use, such as in a game or blender render for instance, raising the limit doesn’t matter if we could never reach the limit anyway.

The single core turbo has been boosted to 5GHz, so that may be useful for lightly threaded workloads, however this is a thermal velocity boost (TVB) number. This means that 5GHz will only be hit in single core workloads if thermals permit, so again likely for shorter burst style workloads.

If it weren’t for the jump from DDR4-2666 to DDR4-2933, we’d probably be looking at a very minimal performance difference. That said, depending on the workload, that will likely still be the case if it isn’t that heavy on the memory.

Intel know the difference is small

When Intel first showed the 10th generation specs to media, their slides only compared 10th gen against 7th gen. Now, you could argue that someone buying a laptop will only be looking to do this every 3+ years or so, which is fair, however it’s worth remembering that after 7th gen was when we started to get more than 4 cores for laptops. 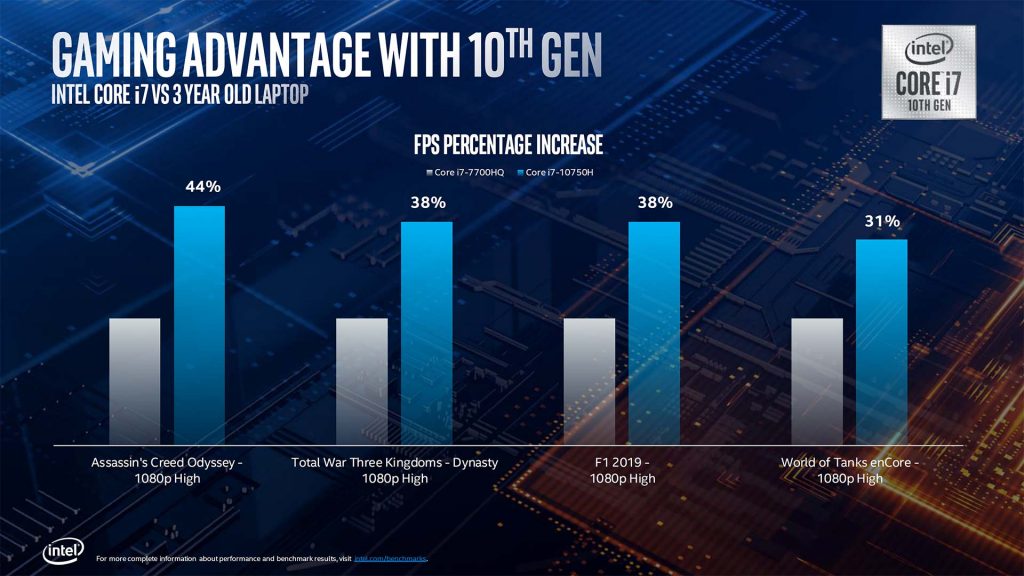 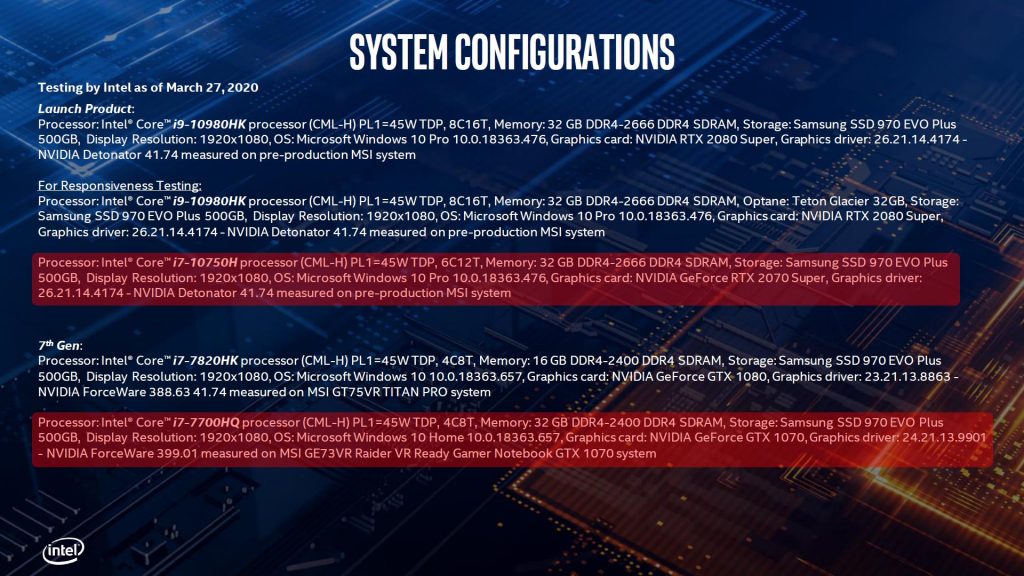 This is a fairly large difference, so the performance gains aren’t even entirely a result of the Intel processors anyway and could be more due to the difference in GPU power.

It can’t be that bad, right?

There’s some hope. For the first time, Intel based laptops will have an 8 core option in the i7 range. Prior to this, 8 cores was only available under the i9 branding, which of course comes with an associated price premium (though this could of course still b the case with the 8 core i7). Given that AMD’s Ryzen 4000 series offers 8 core chips in cheaper laptops compared to current Intel i9 based options, I am hoping to see the i7-10875H get used more as a competitive 8 core option to counter AMD’s offerings.

That said, based on the amount of power the 9th gen 8 core chips would suck down compared to say a 4900HS, we’re probably going to need high power limits with 10th gen which will result in heat. At the very least, I doubt we’ll see a 10875H in say a 14″ chassis as was the case with the 4900HS in the ASUS Zephyrus G14.

In the end, based on the information available so far prior to testing, Intel’s 10th generation mobile offering doesn’t look all that compelling compared to what they had last generation. We’re once more looking at a small improvement of 9th gen, which was a small improvement over 8th gen. At this point it seems like Intel are trying to draw blood from the 14nm stone.